Special Event: Pimp my Parma … One of the best meals I have ever had!

Regular readers of this blog will recall a few weeks back the Parma Consigliere and I hosted our friends the Canns for their first chicken parmigianas at the Norman Hotel.  Last Saturday night, the Canns hosted us for an event that has been described by our chef for the evening, Geoffrey Cann (follow this bloke on twitter: @geoffreycann or read his blog geoffreycann.com), as “Pimp my Parma” night.

One of Geoffrey’s conditions for having us over for dinner was that I did a review of his chicken parmigiana in the style of my normal weekly parma reviews.  Before I do that I will say this: I mean what I say in the title … this was one of the best meals I have ever had.  Thank you Geoffrey and Marj Cann, our friends from Canada, for your hospitality and pimping my parma!

All of that being said, here is the review of Geoffrey Cann’s “Pimp my Parma”:

The Verdict: This is the first time I have had the privilege of watching a chicken parmigiana made before my eyes and to say I was impressed with the chef’s efforts in the kitchen would be an understatement.  As impressed as I was with the efforts of the chef, I was even more impressed with the meal that he presented to us. Everything was excellent save for one minor criticism: the chicken piece was placed on top of the potatoes, an approach that I have waged metaphorical war with on this blog. 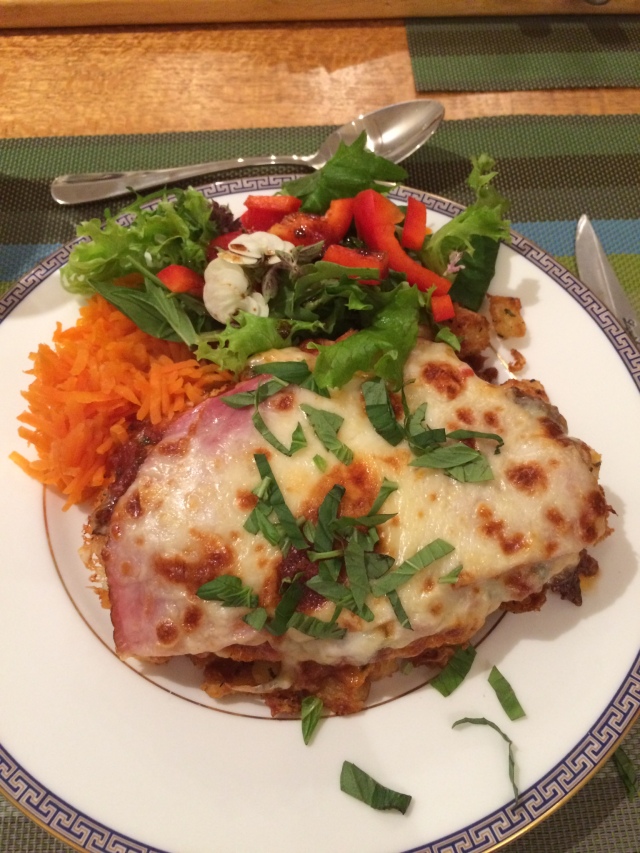 Chicken: The chicken on this chicken parmigiana was a half breast of chicken which the chef belted with a rolling pin and salted before crumbing.  It was cooked perfectly.  The meat was tender and the outer casing was perfectly crispy.

Ham: Our chef, Geoffrey, used large pieces of double smoked ham which for me were the hero of this dish.  The ham had to be a good piece both in taste and size to complement the amount of chicken and sauce on offer and it ticked both boxes!

Cheese: The cheese was, again, perfect.  A mixture of two cheeses (I am embarrassed to admit that I can not recall which cheeses the chef used), the cheese on this dish was perfectly melted and tasted great!

Side Dishes: Chef Cann provided us with three side dishes and I will deal with each of them in turn.

Presentation: I mentioned in the verdict that the only criticism I can make of this dish is that the chicken piece was placed on top of the potatoes.  This normally bothers me but once I realized just how well the potatoes were cooked it ceased to worry me and I enjoyed the dish immensely despite this minor issue.

The Final Word: I can’t give a bigger wrap for this chicken parma, and the work of my good friend Chef Cann, than to say that it formed part of one of the best meals I have ever experienced.  Yes the chicken piece was on top of the potatoes but that actually did not detract from the dish because the potatoes were just perfectly cooked.

Postscript: It would be remiss of me to not mention the other courses put on by Chef Cann as part of the Pimp my Parma experience.  Cream of Cauliflower soup for entrée was just wonderful.  I did not tell Chef Cann that I usually avoid cauliflower with every fibre of my being however this soup was so good that I was nearly tempted to lick the bowl.  Dessert was a peach crumble and it was perfectly cooked and tasted great.

This entry was posted in Uncategorized and tagged brisbane best parma, chicken parmigiana, pimp my parma. Bookmark the permalink.